Bed and breakfast Trapani, at the port in the historical city center, near the beach with sea view

To discovery from Trapani

Staying in our bed and breakfast it is possible to reach in a short time all the most beautiful and famous places of Trapani: Egadi Islands, Segesta, San Vito Lo Capo, The Saline  Nature reserve. etc.

Trapani, its port, its churches, and its jewels

The ancient Drepanum offers a charming historical centre with a lot of baronial buildings, city walls and sighting towers. The city is famous all over the world for its corals and for tuna fishing. Nowadays Trapani is the italian capital of sailing. 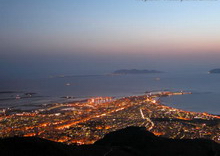 It is located in Western Sicily and rises on the same promontory of the ancient Drepanum, Greek word whose meaning is sickle, because of the shape of its promontory where the town is located. It is also called “ the town of the two seas” because the north side coast of the town is on the Tyrrhenian Sea, while the east one is on the Mediterranean Sea. In the last years it developed a flowered economic activity bound to the extraction and the trade of salt, thanks to its natural position on the Mediterranean Sea and to its famous port which in ancient times served as commercial access to the most famous Eryx located on the mount which rises above Trapani. Other flowered activities were and are still fishing, of tuna fish in particular for which it was used the classical tuna slaughter technique in the several tunny-fishing nets located in the town and in its surroundings (Saint Giuliano, Saint Cusumano, Formica Isle) and in its province (Favignana, Bonagia, Saint Vito Lo Capo, Scopello, Granitola Cape), the extraction and the commerce of marble and the manufacturing of coral.

Erice is well known all over the world because of its enchanting medieval small village, its amazing landscapes, its sweets, its ceramics, as well as for the scientific research centre "Ettore Maiorana". Once upon a time Erice was the religious capital of the mythical Elymian people. 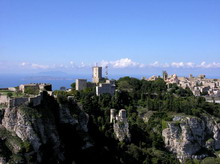 Erice is located on the top of Mount Erice, about 750 metres above sea level, overlooking the city of Trapani, the low western coast towards Marsala, the dramatic Punta del Saraceno and San Vito lo Capo to the north-east, and the Egadi Islands on Sicily's north-western coast, providing spectacular views. There are two castles that remain in the city: Pepoli Castle, which dates from Saracens times, and the Venus Castle, dating from the Norman period, built on top of the ancient Temple of Venus, where Venus Ericina was worshipped. According to legend, the temple was founded by Aeneas. It was well-known throughout the Mediterranean area in the ancient age, and an important cult was celebrated in it. Erice hosts important scientific meetings at the "Ettore Maiorana" center, organised by the controversial astrophysicist Antonino Zichichi.

Distance  from La Terrazza sul Porto Bed and Breakfast: about 15 km, reachable in about 20 minutes (by cableway). For further information

For the Greeks they represented the limits of the known world. For the Phoenicians and Carthaginians they were important commercial basis. The Romans made them their defensive bulwark against Amilcare's and Hannibal Barca's armies. And so on, going through Arabian, Norman and Spanish people, whose tracks can be still found in their inhabitants' surnames.

The first and biggest island of the archipelago is Favignana, which has almost a butterfly shape. The ancients used to call it “ Favonia”, because of the wind which always blows there. The island is a microcosm to discover, with the old “Tonnara Florio” plants, the isolated “Saint Caterina” fortress, and the Cathedral square, the vital center of the island, both for islanders and tourists. And how could we forget to talk about its old tuff quarries, its inlets, like the wonderful Cala Rossa and Cala Azzurra with their crystal clear waters. Just a bit over there, there is Levanzo, the smallest island of the archipelago (just 10 kmq), and also the closest to the port of Trapani. Characteristic are its little white houses grouped near the little port full of coloured fishing boats. Levanzo is a a strip of land which preserves some among the oldest vestiges of human presence in Sicily. The rupestrian figures of men and animals painted and scratched on the walls of Genovese Cave, bring us back up to the Mesolithic, with its obscure rites, and its mysterious and wild life. Marettimo, the farthest and the most rocky of the three islands, is very silent and peaceful. There you can spend your days at the sea or walking along its paths bordered by luxuriant vegetation. As well as Levanzo, Marettimo is the ideal place for diving lovers, thanks to the different kind of seabeds which surround the island, and above all thanks to the hundreds of caves present along the coast.

Distance from La Terrazza sul Porto Bed and Breakfast: from 20 (towards Levanzo) to 75 minutes (towards Marettimo) by hydrofoil . For further information

The municipality of San Vito Lo Capo was born in the late eighteenth century in the territory which was of Erice. It is located at the bottom of Mount Monaco, in the bright bay between Capo San Vito and Punta Solanto. In the numerous natural hollows it is possible to find a lot of traces of the Paleolithic, Mesolithic, and Neolithic age. In fact once those hollows were house with view on the sea. Enveloped in the mystery is the existence of an old small village called Conturrana. It was a huge cliff which detached from the mountain and it is located 500 feet away from the shore. In this place probably in the late fifth century there was a little village. Nowadays the centre of the town is an imposing church the Sanctuary of San Vito. Once this church had a defensive function against the corsairs. Up to 30 or 40 years ago there was just a few fisherman houses, while now San Vito Lo Capo is a typical nice Mediterranean town.

Distance from La Terraza sul porto Bed and Breakfast : about 50 km, reachable in about 45 minutes. For further information

The first who installed the basins for salt picking were the Phoenicians about 3000 years ago. Then comes the windmills and the first half-industrial works. Now it is a magical place, which offers amazing sunsets, among the most beautiful of the world. 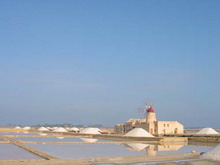 The reserve includes a coastline extended almost a thousand hectares, divided into Zone A, the reserve area (707 ha), and Zone B of Pre-Reserve (278.75 ha), on the border between the municipalities of Trapani and Paceco. The environment of salt, highly salty, hosts numerous shrubs or herbaceous species which adapted themselves to the extreme environmental conditions of this area. The area also has a particular interest on the ornithological point of view, because it is a stop on the route of migration towards Africa. Considering both the nesting species wintering those who were surveyed 196 different species of birds.

Distance from La Terrazza sul Porto Bed and Breakfast: about 10 km, reachable in about 15/20 minutes. For further information

Mothia and the Stagnone, the places of the ancient Carthage

The biggest and most important Phoenician colony in Sicily, in the middle of a charming lagoon area which also has an important naturalistic interest. 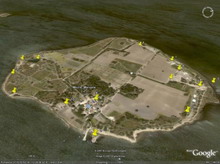 Mothia was founded at the end of VII century B.C. on the island of San Pantaleo, located in the centre of a large lagoon, known today as 'Stagnone'. Thanks to its location, particularly favourable to maritime trade, Mothia soon became one of the most prosperous Western Phoenician colonies. The more outstanding public works date back to the second half of VI century B.C., namely the fortifications, a submerged road which was used to link the island to the mainland, near Birgi, the cothon (or drainage basin and harbour) and the main sanctuaries, in particular the tophet, where the burnt remains of offerings and sacrifices in honour of the god Baal Hammon were collected. Over one thousand carved steles where discovered here, undoubtedly the most significant evidence of Phoenician Punic sculpture. The ancient town’s industrial area features several omega-shaped furnaces, in every way similar to the more ancient pottery furnaces used in Phoenicia.

Distance from La Terrazza sul Porto Bed and Breakfast: about 25 km, reachable in less than 40 minutes. For further information

Segesta, the immortal glory of Elymians

The ancient political capital of Elymian people, of undoubted Greek/Phoenician origins, which still dominate the top of mount Barbaro. It gives to the visitors a picturesque trip to the time of Greeks, and Punic wars.

It is placed in the northwestern part of Sicily in the province of Trapani and in the municipality of Calatafimi-Segesta. The unfinished hexastyle Doric temple of Segesta, (late 5th century BC) is built on a hilltop just outside the ancient city of Segesta with a commanding view of the surrounding area. It is one of the best-preserved Greek temple. The theater is located in a beautiful place, in the top of a mountain, from where a wide and amazing landscape can be seen.

Distance from La Terrazza sul Porto Bed and Breakfast: about 25 km, reachable in about 35 minutes (via highway). For further information

The city is full of history and charm, and it is known all over the world for its liqueur-like sweet wine, and for its tradition in cultivations and wine-making. In this city Garibaldi landed with its army for the unification of Italy, and it was also the Phoenician Capital in Sicily. 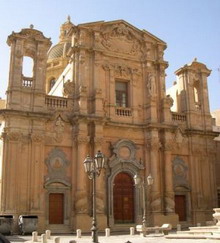 Marsala occupies the site of Lilybaeum, the principal stronghold of the Carthaginian in Sicily, founded by Himilco in 396 BC after the abandonment of Mothia. Neither Pyrrhus nor the Romans were able to reduce it by siege, but it was surrendered by the latter in 241 BC at the end of the First Punic War as a condition of the peace treaty. The modern town takes the shape of the Roman camp within the earlier city, one of the gates of which still existed in 1887. The main street (the Cassaro) perpetuates the name castrum.

Distance from La Terrazza sul Porto Bed and Breakfast: about 40 km, reachable in about 40/45 minutes. For further information 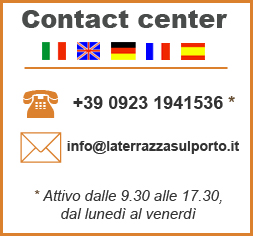 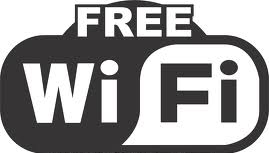